Skip to Main Content
It looks like you're using Internet Explorer 11 or older. This website works best with modern browsers such as the latest versions of Chrome, Firefox, Safari, and Edge. If you continue with this browser, you may see unexpected results.

A guide to citation following the MLA8 format

Begin the entry with the author’s last name, followed by a comma and the rest of the name, as presented in the work. End this element with a period.

When the source has two authors, include them in the order in which they are presented in the work.  Reverse the first (like above), follow it with a comma and and, then give the second name in normal order.

When the source has three or more authors, reverse the first of the names (like above), follow it with a comma and et al. 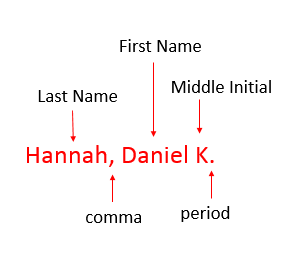 Examples on this page are from: Utica College