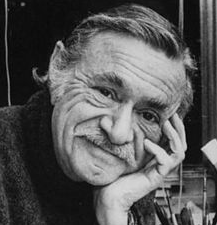 Ezra Jack Keats was born Jacob Ezra Katz on March 11, 1916 in East New York, Brooklyn, the third child of Polish-Jewish immigrants Benjamin Katz and Augusta Podgainy. The family was very poor. Jack, as he was known, was artistic from an early age, and joyfully made pictures out of whatever scraps of wood, cloth and paper that he could collect. Benjamin Katz, who worked as a waiter, tried to discourage his son, insisting that artists lived terrible, impoverished lives. Nevertheless, he sometimes brought home tubes of paint, claiming, "A starving artist swapped this for a bowl of soup."