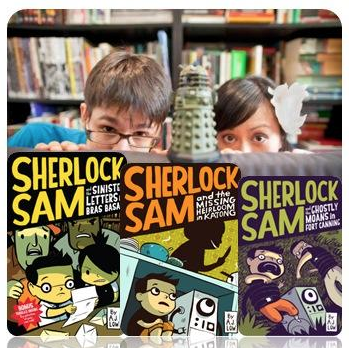 Born in the San Joaquin Valley in California to Mexican immigrant parents, Adan Jimenez became an immigrant himself when he moved to Singapore after living in New York for almost a decade. He has worked for comic book stores, book stores, and gaming stores. And a hoagie sandwich shop once. He loves comics, LEGOs, books, games (analog and video), Doctor Who, sandwiches, and his wife, Felicia. Not necessarily in that order, though.

Felicia Low-Jimenez has worked in the book industry most of her adult life. She has bought books, sold books, marketed books, and now she is trying her hand at writing books. She loves to nap and eat chocolate, though not at the same time. She spends most of her free time reading and when she can afford it, she travels, usually to look for beautiful bookstores around the world. Most of all, she loves her husband, Adan (who insisted that she include this).